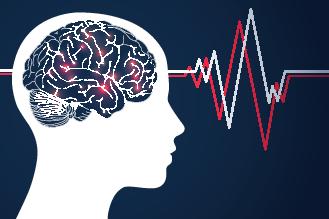 Gamma waves are specific patterns of electrical activity in the brain that occur at frequencies between 30-100 Hz.  The 40 Hz frequency point generates the most interest. Gamma has long been the term used to describe oscillations of brain activity higher than 30 Hz, with frequencies typically ranging from 30 Hz to 80 Hz.  More recently, a “high-gamma” label has been applied to frequencies between 80 Hz and 200 Hz.  Gamma and high-gamma activity can occur simultaneously in the brain.

What impact do gamma waves have on cognition?

Gamma brainwaves are required to process information in different areas of the brain, particularly in the higher-level tasks needed for cognitive functioning, learning, memory, and the processing of information by the brain. Gamma waves are associated with sensory perception, memory formation, and voluntary movement.

There is an optimal range for gamma activity, which leads to better focus, attention, sensory processing, cognition, information processing, learning, perception, and REM sleep.  With too little gamma activity, problems such as ADHD, depression, and learning disabilities result.  Too much gamma activity can lead to anxiety, stress, and hyper arousal.

Low-frequency brainwaves have been associated with a slowing of brain activity. Cognitive impairment and memory loss occurs when large areas of neurons are not integrated properly in the brain. Cognitive function is complex and effective cognitive function leads to proper attention and memory and the necessary grouping of constantly changing thoughts and processes. Awareness requires this integration to make sense of the inputs into the brain. This integration is facilitated by gamma activity.

External sensory input is constant, prompting competition among neural reaction events for “representation and perception.”  The brain must select and process relevant information to most efficiently use its processing resources. Gamma oscillations are stimulated by this sensory input, typically ranging from 40 Hz to 100 Hz, that aid in the processing of the barrage of sensory information.

Gamma rhythms are widespread both while awake and when in a dream state.  Magneto-encephalograms (MEGs), which are very sensitive recordings of magnetic activity in the brain, suggests that these rhythms may sweep the entire brain, binding together multiple perceptions into a single cognitive experience.

Magnetic field therapy using an appropriate frequency can help synchronize neuron firing throughout the brain. This synchronization is crucial in integrating nerve signals and promoting neuroplasticity.

The amount of gamma production, as well as synchronization of signals, impact attention.  With higher gamma production and better synchronization, attention becomes stronger.  The basal forebrain, which is located at the bottom part of the front of the brain, provides vital input for both attention and gamma activity.  Acetylcholine, which is important in controlling behavior and, also, critical to memory, is produced in the basal forebrain.  Damage in this area is evident in dementia associated with both Alzheimer’s disease and Parkinson’s disease. Stimulation with magnetic therapy over the temples could increase gamma activity in this area, which may benefit those with attention, memory, and focus issues.

How is PEMF therapy different than other entrainment stimuli?

There have been many stimuli used for entrainment, most commonly audiovisual, pulsing lights, sound, and transcranial electrical stimulation.  PEMFs have many advantages over some of these other forms of stimulation. PEMFs are extremely safe, can target specific areas of the brain, and penetrate the entire brain.

PEMFs can also offer secondary benefits such as reducing inflammation, increasing ATP, reducing Alzheimer’s plaque development, increasing circulation, and stimulating both neurotransmitters and neural stem cells.  This adds great value to the use of PEMF therapy for entrainment.

PEMFs pass through the brain entirely, a major difference from other approaches.  Other entrainment approaches are absorbed by the brain, which can produce harmful heating effects. They also produce indirect effects through interactions with the nervous system, probably accounting for a large part of their actions.  PEMFs, on the other hand, can be more directly controlled and targeted to act on the brain (although this will also produce secondary benefits in the body).

A flexible device for PEMF therapy and entrainment

FlexPulse launched a new PEMF device called the G2 with four new programs available. These new programs will allow for even broader use of the FlexPulse PEMF device for brain stimulation. Although neural stimulation is a major benefit and emphasis for FlexPulse programs, the pulsed electromagnetic field frequencies also provide the full range of benefits that any PEMF machine provides, including healing, increased energy production, and balance.

FlexPulse systems have been developed based on more than 3 decades of research and thousands of studies.  Other entrainment methods can be prohibitively expensive and require hours of time spent in a clinical setting.  With a FlexPulse system, therapy for entrainment can take just 30 minutes before bed – but can also maintain entrainment through overnight use, meaning you can do it in your sleep!

The portable FlexPulse device allows for easy treatment wherever you are.  The value of owning a PEMF device increases exponentially when used for multiple family members, and with the range of programs the G2 will offer, there are options for many more conditions you are dealing with.

The FlexPulse comes with a 30 -day satisfaction guarantee and a 2-year International warranty, making it a no-risk alternative for boosting memory, cognition, and attention – along with a host of other healing benefits!